All of this research on small submarines got me to thinking about photos of my daughter and me in small submarines. When she said she wanted to be a submariner when she got bigger that made me worry (she still says this).

Then she said she didn’t want to be in the big black submarines like papa she wants to be in the small research submarines. Now I’m breathing again. HaHaHa

I hope you enjoy my article on our other small submarine, Dr. E. Lee Spence’s Hunley. This week’s article will be published tonight at midnight New York time.

The last article in the Hunley series will be next weekend, Spence VS Cussler: Who Found the Hunley?

Comments Off on Speaking of Small Submarines

: Or how anyone can draw a sailing ship in 30 seconds or less

As I promised here is how John Alexander taught me (when I was not much older than Elizabeth) to draw a sailing ship. There are fifteen steps, and your first ship will take a little longer to draw than thirty seconds. But, after you draw a couple, you will probably be able to draw several ships in thirty seconds.

Elizabeth’s first sailing ship, drawn just like John Alexander taught me when I was not too much older than her. (Elizabeth added the flag on her own).

First, let’s see where we are going. Above is Elizabeth’s first drawing of a sailing ship. Your sailing ship will look similar to her’s.

Now that we know where we are going, we can start. Each step is numbered in the drawing, draw them in order and you will be fine. 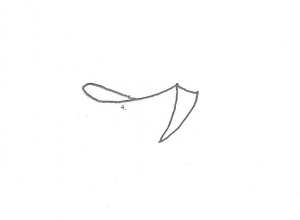 Step 4 looks complicated, but it is not. It may be easier for you turn your sheet of paper sideways and draw a flat letter “P”. The line is the top of the starboard (right) side of the ship. The inside of the loop is the deck at the stern (back) of the ship. You are giving your sailors a firm place to plant their feet. 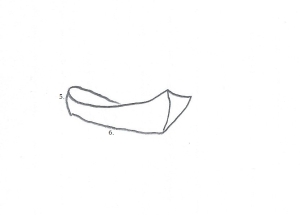 Step 5 is the stern (back) of the ship and step 6 is the rest of the starboard (right) side of the ship. Your sailing ship is now starting to look like a ship. You have given your ship its form.

Now you need to get your ship moving. Wind moves sailing ships, and sails harness that wind. Your ship needs sails. But, before you draw your sails for power, you need a strong foundation to support those sails. Step 7 is part of the mast. Some masts on some ships go more than 150 feet into the air. The mast supports the sails and the yardarms. Step 8 is a yardarm. The yardarm is the cross-piece that spreads the sails, it also supports the sails and keeps them in place. You now have the foundation and support to control your power.

Steps 9 and 10 define the sails. They are curved because of the wind, your ship is moving. But, most people do not know the wind can pull a ship as well as push a ship. When the wind is coming from behind a ship, it pushes on the back of the sails and moves the ship forward. However, if that were the only way to move a sailing ship, ships would have a hard time getting to their destination. Sometimes the wind is blowing against the ship. So what do you do? You steer a course a little to the left or right of the wind. As the wind passes the front of the sail, it creates a low pressure area in front of the sail, like the top of an airplane wing. This low-pressure area pulls the ship forward. Now you can steer your ship to any destination you want. 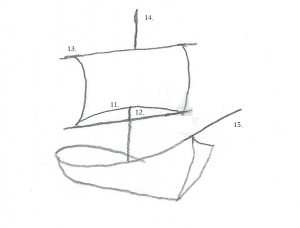 Step 11 is the bottom of the sail curved by the force of the wind. Steps 12 and 14 are the rest of your mast. Step 13 is the yardarm where the top of your sail is attached to the mast. Step 15 is the bow sprint. On great lakes ships it is not called a bow sprint, it is called a steering pole. There you have it, your sailing ship.

A refresher before you go.

First, you get an image of where you want to go.

Then, you decide your direction.

Next, you need a firm foundation to plant your feet on.

Then, you create the form of your project.

Now, you need to power your project, and to control that power.

Sometimes forces work against you, but do not despair, adjust your course and steer toward your destination. You will prevail.

You see? You have been drawing ships your whole life. Now you can do it with paper and pencil too.

Now go out a teach someone else how to draw a sailing ship. Let’s see just how many more people can learn from John Alexander.

R.M.S. Titanic In The News

28 March 2012: New article on the huffpost about the Molly Brown House Museum and Titanic survior Margaret Brown. The museum has special events for the 100th anniversary of the sinking of Titanic. Pretty good article and good photographs.

via R.M.S. Titanic In The News.

Titanic, A Search For Answers is now available in hardback

“Titanic, A Search For Answers” is now available in hardback, with even more photographs.

It should be available at amazon in about two months, but you can buy it now at LuLu by following the link below.

Comments Off on Titanic, A Search For Answers is now available in hardback

Titanic, A Search For Answers trailer

Titanic, A Search For Answers trailerClassic images from the Titanic and her loss. Includes voice over questions that are answered in the book. Using some of the photographs that are in the book as well as other photographs.