For A Good Read …

My blog is mostly for articles I write for you, a discussion between us. As many of you know I also have books out. If you would like to find out more about my books (what they are about, when the next one is coming out, background information, and where to get them) you can go to my Facebook page ( Joe C Combs 2nd artist/author ) and hit like. I do mention my books here from time to time. But, for the most part I like to keep my blog for our Sunday morning conversations and my Facebook Author’s Page for my books. 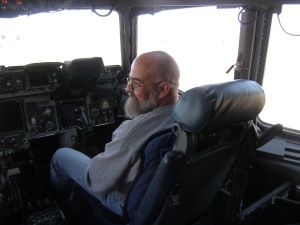 Elizabeth in the pilot’s seat

Elizabeth at a rear side door C-17

Elizabeth is the pilot, Daddy is the co-pilot

On Saturday during thanksgiving break I went on a trip to South Carolina.

My dad’s old friend that he grew up with (named Martha) let us stay at her house in the guest bedroom, she treated us like family. She also made it possible for me and my dad to go see the super plane with the pilot named Chris and his wife named Jen.

Chris gave me, my dad, and Martha a tour INSIDE of a really cool plane first when we got in there was a lady in uniform saying watch the rollers or you’ll slip and fall on your behind. At first I thought to myself ‘’rollers what are rollers?’’ Well I asked a question and I got an answer. Rollers were the things on the floor that rolled back and forth on the ground. I guessed it was so it would be easier to get the big crates around the plane but just to be sure I asked Chris and it was just as I suspected.

I asked a lot of questions and got to see the second floor that I called the top deck. It was where the pilots would steer the plane. There was also two bunks behind the pilot chairs, I got to sit in them!

One of the questions I asked was about a device that if oxygen was escaping you you’d press a couple of buttons (I guess they would get the oxygen flowing or something) and then pull a mask over your head.

It was a really cool and a really big plane and I mean SUPER BIG.

I would like to say thanks to Martha for making it all possible, thanks to Chris for showing me around the plane, thanks to Jen for being super nice and helpful, and thanks to my dad for giving me the opportunity to write this article… also thanks for listening. : )

Comments Off on Super Plane


On November 16, 2015, I shared a blog post from a friend of mine, Sheri (The Other Side of Ugly). Sheri’s friend Catherine (Live from Your Heart and Mind), has started the hashtag #prayforpeace to spread positive healing energy around the world.

I have watched over the past few decades as the people of the world have become more and more intolerant of those who are different from themselves. We have ALL become more intolerant, those on the right, left, and even moderates. The animosity extends to anyone who is different and they return that animosity full force.

My background is different from Sheri and Catherine, but my desire for peace is just as strong. I am a veteran of the United States Navy Submarine Force. I will go back on duty if I am called up. There are times when wars must be fought, but as long as war can be avoided it is our responsibility to continue to work towards peace. As Dr. Martin Luther King Jr. said, “Peace is not the absence of war, but the presence of justice.”

That justice is a justice for all and does not pick one side over the other. To have that kind of justice means we need to be tolerant of each other and our differences. We do not have to like each other, but we must respect each other.

The people who are talking of war right now are not the ones who will have to fight that war. Those who will have to fight the war are predominantly in their early twenties and younger. Those in that group who are killed will not only die a physical death, but they will die the second death, a worse death, the death of being forgotten. Those who want war right now would be better off to put their efforts into insuring our enemies do not cross our borders to bring death and destruction to our own streets, our own homes.

Who are the forgotten? Who are these young people taken from us at the very beginning of life?

Men like Corporal Robert E. Goodykoontz US Army 7th Infantry Regiment 3rd Division, killed at the battle of Belleau Wood, June 16, 1918. He is buried on the battlefield, Plot A Row 4 Grave 53. He is lucky in one respect, his grave is known. Thousands of young men like Bob lie in anonymous graves known only to God. Bob will be forgotten one day. He was so young that he did not have a family of his own to mourn his death. I learned of Bob from his younger brother, my grandfather, who sixty years later still missed his big brother. But, after I am gone he will be forgotten with no one to remember him or to visit his resting place.

Thousands of our young people have already died the second death, they have no descendants they were too young when we lost them. By entering a war while we can still seek peace we are dooming thousands of young people to follow in their footsteps. Young people on both sides, intelligent and talented young people with a good life in front of them, but when we rush to war too soon we rob them of that future.

We had to fight Hitler, and we may have to fight this war as well. But not yet, not yet. I am asking you to join me and thousands of others in praying for peace. I do not seek appeasement but a genuine peace with justice for the people on both sides. There is still time. Please, join me in praying for peace while we can still have peace. 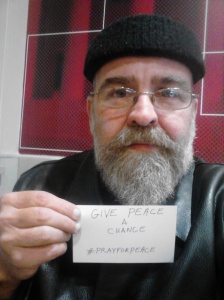 Comments Off on War or Peace