A very good program, I only wished they showed more of the mapped out debris field. There were only two problems I saw with the program.

Try this to see what I mean. Take a playing card, say the ace of spades, lay it flat on a table. Now pick the card up a thumb on each end, and while holding the card parallel with the table bend the card upward. This is how the hull plates on the bottom of Titanic flexed when it ran over the ice shelf. Now turn the card on its side so you can see the ace of spades and have someone push up on the thin edge that faces the table. It does not want to flex. That is what happened to the hull plates on the side of Titanic as it ran over the ice shelf.

With the weight of the ship being pushed upward in a small area of the hull by the ice something had to give, and that was the rivets. Even when ships from any era are put in dry dock they must be supported every three to four feet (or less) or the hull will fracture, permanently damaging the hull. Look at the photos below. 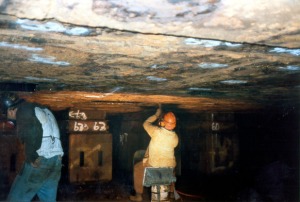 The modern Zaandam in drydock. Notice the blocks ever few feet to support the hull.
Photo courtesy of Wikimedia.

Second: They assumed that the ship broke into two separate pieces while it was on the surface. During the show they showed two things that conflict with eyewitness testimony. They showed the stern only rising a few degrees out of the water, and they showed something a lot less than 200 feet of the stern rising out of the water.

They noted the stretched steel on the broken pieces of double-bottom and correctly described this as happening when the bow was hanging on the stern. But those pieces stretched as the bow pulled the stern under.

Conclusion: I hate to point out these discrepancies. The show was outstanding as was the work of all those involved. However, unless we correctly identify exactly what happened and why, we are at risk of this happening again (as I stated in my book Titanic, A Search for Answers).