This week’s article was written, but on Friday I scrapped it when I heard of the sad demise of a veteran. Sara was six years older than me, but you would have never known that when she was on active duty in the Navy. She served for thirty-eight years, and took part in action from Vietnam to Operation Desert Storm, but she spent most of her time in the Mediterranean. During the 1980s, when Navy planes were called upon to take action in the Middle East or North Africa they most likely came from the decks of the mighty USS Saratoga, CV-60. She Was a Forrestal class carrier and unlike the newer carriers was a conventionally powered ship. The newer carriers are all nuclear powered. But this did not slow her down at all; she could make 35 kts. or better.

She was the sixth US Navy ship to be named for the Battle of Saratoga in the American Revolutionary War, and the second aircraft carrier. She was decommissioned in 1994 and since then there have been many attempts to preserve her as a museum, but Friday the Navy announced it paid one cent to ESCO Marine of Brownsville, Texas to dismantle and recycle her.

She had a colorful career. In 1960, she was involved in a collision with a merchant ship. There were also a few shipboard emergencies during her career, like all ships. One fire in 1961 claimed the lives of seven crewmen. The Sara returned to the shipyard for repairs after she completed her patrol in the Med.

In 1967, just after she arrived in the Med, she was called on to care for the crew members of the USS Liberty after the Liberty was attacked by the Israeli’s during the 1967 Arab-Israeli War.

President Nixon, the second president the Sara hosted, was onboard the Sara in the Mediterranean when President Gamal Nasser of Egypt died. The concern was his death could plunge the entire Middle East into a crisis, and the president left the next morning.

It was seven F-14 Tomcats from the Sara that caught up with the terrorists from the Achille Lauro and forced them to land their plane in Italy, where Italian authorities arrested the terrorists. This was on orders of President Reagan. President Reagan used the Saratoga quite a bit. When Libya declared the international waters of the Gulf of Sidra were the territorial waters of Libya the Saratoga was sent into those waters.

The Sara made many firsts during her career and broke numerous records; and on more than one occasion off-loaded less ordinance than she on-loaded. A book could be written about the exploits and career of the Saratoga. We did not even touch on the daring rescue of one of her downed pilots in Vietnam. He was snatched from in front of the enemy by helos and returned to the Sara. We also did not talk about the time an enemy president claimed to his people on TV the Saratoga had been sunk.

The Saratoga should have been made into a museum. She was a great symbol of war time and peace time history. She weathered real and metaphorical storms, but she always came out on top and was always on the front lines ready to defend the people back home when needed.

So long old girl, you served us faithfully, fair winds and following seas my lady. 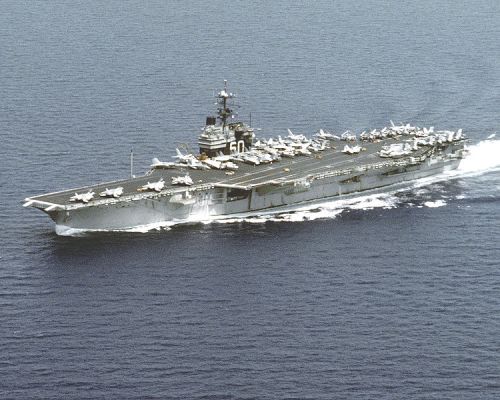 Comments Off on Fair Winds and Following Sea to Sara