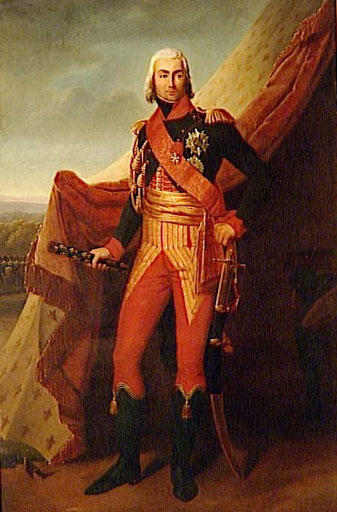 Napoleon Bonaparte in the coup d’état of 18 Brumaire in Saint-Cloud. (Photo credit: Wikipedia) His Grace Jean Baptiste Bessieres, First Duke of Istria, Marshal of France, awarded the Legion d’Honneur (grand eagle, the highest rank), knighted in two countries, and numerous other awards for bravery and valor in battle.

Jean Baptiste Bessieres was born on 6 August 1768, in Prayssac near Cahors in southern France. His father was a successful and affluent country surgeon. Jean was 21 and studying to follow in his father’s footsteps when the French Revolution began in 1789.

In 1791, the new Legislative Assembly was divided between those who wanted a constitutional monarchy like England and those who wanted a republic. It was a dangerous time in Paris and the royal family decided to secretly flee to Varennes near the Austrian border. In Austria they would join those who had fled France in voluntary exile, and with the support and protection of Austria, retake France.

On 21 June the royal family fled Paris, dressed as their servants. Jean Baptiste Bessieres joined those protecting the royal family on their attempted escape from Paris. The king was recognized in Varennes and captured before the royals could get into Austria; they returned to Paris 25 June under house arrest in the Tuileries.

On 13 August, the king was officially arrested, and on 21 September, France was declared a Republic. On 21 January 1793, King Louis XVI was executed. Afterwards Bessieres traveled south joining a cavalry regiment and was elected a second lieutenant.

All during this time, France was involved in war with foreign countries invading France and violent struggles among the revolutionaries within the country to establish a legitimate government in France. The Jacobins emerged in power after four years of struggle within France. The Jacobins were a political club that wanted France to be a democratic republic. By September of 1793, the Jacobins created the Committee for Public Safety and the Reign of Terror began, lasting for twelve months. Under the direction of this committee and its leader Robespierre, the streets of Paris ran red with blood until the execution of Robespierre in July 1794. The Jacobins were outlawed and most of its leaders also executed.  While all of this was going on, France continued to be attacked by foreign countries that feared the violence of France spilling over into their own country.

In 1795, Bessieres’ regiment was sent to the Pyrenees and coastal Italy, not good terrain for cavalry. It was while in Italy he attracted Napoleon’s attention with his calm and intrepid personality.

Of course, Jean Bessieres would have attracted attention anywhere he went. He was tall with a natural military bearing and grace, with long powdered hair (like the 18th century military men before him). His hair style fitted his youthful face. Bessieres was a man of integrity, very exact and even-tempered; in battle, he possessed an almost cold courage. Some of his contemporaries described him as unflinching. He was more intelligent and had better judgment than his peers. He also had an unusual kindness about him and took better care of his men, horses and equipment than other generals. Though, he was very disciplined, he was well loved by his men. At the battle of Wagram a cannonball struck Bessieres’ horse; killing the horse, injuring him, and knocking him unconscious. He was carried from the field of battle. His men, thinking he was dead, wept and charged into battle vowing revenge.

Meanwhile Bessieres was serving his country in the cavalry under General Bonaparte, first in Italy, then in Egypt and the East. Bessieres had risen to the rank of colonel and become a trusted friend of General Bonaparte. In November, General Napoleon Bonaparte secretly returned to France with a small body of trusted friends to take the reins of power through a military coup. Bessieres was a member of this small group and helped Murat, Lannes, and Marmont secure the support of the Army for Napoleon, and he went on to play a prominent role in the coup d’état.

In March 1804, when Napoleon had the Duke of Enghien executed on dubious and shifting charges, Bessieres protested loud and long against it. Apparently, Bessieres did not suffer from blind loyalty for his best friend and Emperor.

Thirty years ago, I was a young man still forming my approach to history. I accepted the history books at face value, except those areas I knew to be stilted concerning America’s Civil War. I knew the victor had written the history books in their favor on that great conflict, but was this the case throughout historical writing. I was determined to find out, and decided a good place to start my quest was with Napoleon, one of the most important military leaders in history.

I knew from history that Napoleon was an egomaniac determined to sacrifice his own country and Europe to feed his own ambitions of power, fame, and glory. I realized much of what I could find in English about Napoleon (I don’t read French) was written after the fact and could be tainted by the victors. So, I chose to start with Napoleon’s Marshalls. I chose, at random from a list of Napoleon’s first selected Marshalls, Jean Baptiste Bessieres. My approach to history was changed forever. From that point forward I would conduct my own research of primary source material, read the analysis of professional historians, and then arrive at my own analysis. Without Bessieres, my historical work as you see it today would not have been possible. The articles that so many of you have expressed appreciation for, through your comments and e-mails, would have never been written.

Family tradition has Bessieres as royalists; Bessieres himself proclaimed to be a Jacobin; and most historians list him as a republican. I found Bessieres to be none of the above. To me Bessieres was a man loyal to France, a patriot. When France was in upheaval and under threat from forces within and without the country Bessieres sided with his country and not any particular government. When the Monarchy seemed to be France’s best hope for stability, the 26-year-old Bessieres risked his life to protect the Royal family. When the Jacobins seemed to be France’s best hope for stability, he joined the Jacobins and became a republican. When the Jacobins threatened to tear France apart with a second Reign of Terror to support their own power, he became a prominent figure in a coup d’état that brought Napoleon to power.

Friend and foe alike claimed that Bessieres was a man whose intelligence and cool judgment were above that of his peers. Bessieres had a clearness of vision and his advice always lacked bias, disinterested, but decidedly not uninterested. When, early in the Russian campaign, Napoleon had a defeated the enemy in the field, and had all of his Marshalls convened around him deciding what to do next. Bessieres kept quite while the other Marshalls advised sending in the reserves (comprised entirely of Imperial Guard) to finish off the Russian army. Then Bessieres calming stated to Napoleon, “Sire, you are seven hundred leagues from Paris.”

Napoleon did not send in his reserves.

Yet, when Napoleon executed the Duke of Enghien, unjustly to Bessieres’ view, he did not hesitate to go against his friend and Emperor. Undoubtedly, it was Napoleon’s respect for Bessieres’ intellect and clearness of thought, which saved Bessieres.

When I finished my studies of Jean Baptiste Bessieres, I was convinced the victor tainted our knowledge of Napoleon. Bessieres would not have supported Napoleon for so long if Napoleon had been the self-serving, egomaniac, sacrificing France for his own power and glory that we have been lead to believe.

Next week, more of this remarkable man, Jean Baptiste Bessieres, in war and peace.