From COMSUBLANT (commander submarines Atlantic) the following flash message was sent at 3:15PM, 27 May 1968, to all ships and naval commands of the United States Navy Atlantic Fleet.

“Executed Event SUBMISS at 271915Z for USS Scorpion ETA NORVA 271700Z ….. All submarine units surface or remain surfaced until this message is cancelled. Units in port prepare to get underway on one hour’s notice …..”

What this meant was the USS Scorpion was due to arrive in Norfolk at 1PM (5PM Greenwich Mean Time). By 3:15PM the Scorpion had not yet arrived and all means by the navy to contact the Scorpion had failed.

This message ordered all US submarines in the Atlantic to surface. The navy wanted to insure the Scorpion was the only submarine missing.

The rest of the message was an order to all naval units (submarine, surface, and air) to prepare to leave port and search the Atlantic Ocean for the Scorpion.

Over the next 8 hours more than 40 surface ships and submarines would put to sea. More ships, from Florida to Maine, would put to sea by sunrise. Soon every plane, ship, and submarine in the United States Navy’s Atlantic Fleet would be scouring the Atlantic Ocean looking for the USS Scorpion and her 99 man crew.

Since the end of World War II there had only been one United States Naval operation this big — the Cuban Missile Crisis. 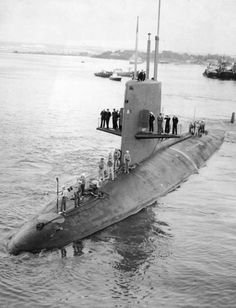 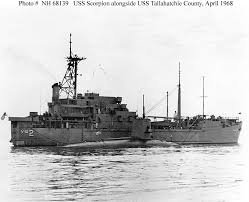