I have been silent on the subject of the H.L. Hunley for almost two years (since the four-part series I did in August 2012). Today I want to talk about a “new” theory on why the H.L. Hunley sank.

January 28, 2013, the AP ran a story by Bruce Smith (well written article I might add). In the ongoing conservation efforts on the H.L. Hunley the conservation team turned their attention to the spar that the Hunley used to attach its torpedo to the intended victim. Parts of the copper casing from the explosive were found on the spar. This means that the Hunley was within twenty feet when the charged detonated.

In the past year this has been discussed quite a bit, the general consensus among the experts is this. The Hunley was within twenty feet of the Housatonic when the charge detonated. This explosion knocked the crew unconscious, this prevented the crew from surfacing the submarine, and they suffocated. They then add, in case you missed their implication the first time, this explains why the submarine never resurfaced after the attack on the Housatonic.

Ok, I have just a couple of problems with this. Before we go to the problems though, I want to say that I agree completely with the Hunley, based on the spar evidence, being within twenty feet of the Housatonic when the charge detonated.

That said, the Hunley did surface, AND made the pre-arranged signal for a guard on the beach to light the bonfires they would use to guide their way back to the pier. Lieutenant Dixon could not have made the signal with the Hunley submerged. The signal was a blue light (visit this page for a good article on the Hunley blue light http://civilwartalk.com/threads/h-l-hunleys-blue-lantern-myth.64150/). The Hunley blue light was a signal flare, which for obvious reasons; Lt Dixon would not ignite inside the cramped confines of the Hunley.

Before the public announcement that the Hunley had been found, there was an ongoing debate about whether the Hunley sunk itself with the Housatonic, the Housatonic sank on top of the Hunley, or if the Hunley survived the attack and sank afterwards. For more than one hundred years the majority of experts believed one of the two former scenarios. This opinion caused many of the people looking for the Hunley to look in the wrong location. A small group of people believed the latter.

The guard on the beach reported seeing the blue light and lit the bonfires. Men on the Housatonic reported seeing the blue light. The experts said that it was impossible for a blue lantern to be seen on the beach from the location of the Housatonic. The confusion over lantern and flare hindered some of the people who searched for the Hunley as well. Knowing that an oil lantern could only be seen for about a mile they search between the Housatonic’s location and the shore. In the twentieth and twenty-first century a blue light is – well – a light. But, in the nineteenth century a blue light was a blue signal flare.

Need another example of the difference in word definitions over the last 150 years?

August 5, 1864. At the Battle of Mobile Bay Admiral Farragut gave an order that is still remembered to this day.

“Damn the torpedoes, full speed ahead!”

Now, when you and I talk about torpedoes we are talking about the weapon used most often by submarines. The torpedoes we are talking about have a small propeller that propels the torpedo towards its target. In the early twentieth century this was called a “self-propelled torpedo.” That is because what we call mines were called torpedoes over one hundred years ago. The Civil War happened before the invention of the self-propelled torpedo. If Admiral Farragut had been a twenty-first century sailor he would have said, “Damn the mines, full speed ahead!” (I think the phrase sounds better with torpedo instead of mine, but I digress).

However, the majority of people thought the blue light signal from the Hunley was an oil lantern with a blue lens on it. Often those who insisted the Hunley survived the attack were derided as Southern Apologists or some other phrase. As if the only reason we were saying the Hunley survived was because we were Southerners.

As the navy always does when a ship is lost, a board of inquiry was formed after the Housatonic sank. The testimony of the Union sailors at the inquiry support the opinion that the Hunley survived the blast and backed away from the Housatonic (the transcripts from the board of inquiry were discover in an archive over one hundred years after the Hunley and Housatonic sank). But, the sailors from the Housatonic freely discussed what they saw that night, and these accounts were readily available to researchers and the public before the inquiry transcripts were found.

So, armed with testimony of Southerners and Northerners, and based on the fact that the area around the Housatonic was thoroughly searched before and after the wreck of the Housatonic was removed; the Hunley must have survived the explosion. Based on the testimony of Southerners and Northerners, the Hunley must have surfaced to light the blue signal flare.

It is still not known what happened to the Hunley. But, it may have been run over (with its hatches open) by one of the Union Navy steamships racing to aid the sailors of the Housatonic. It seems most likely that the Hunley sank as a result of actions immediately after the Housatonic sank, and not directly due to the explosion that sank the Housatonic.

I do not know why it seems so important to some, for the Hunley to have sunk as a direct result of its attack on the Housatonic. However, I think this is one of those issues that will always be in dispute.

I would like to take a moment to applaud the ongoing efforts of the conservators of the Hunley. Their painstaking efforts have shown us that the Hunley was a much more complicated machine than anyone could have imagined. Some of the features on the Hunley were well ahead of their time, and can be found today on modern submarines. Due to the tireless efforts of these men and women, the Hunley will be around for a long time to come. Who knows what new information they will discover about this little submarine as their work continues. Thank you, job well done.

I would also like to take a moment to thank all the men and women, who over the years have searched for, and raised the Hunley. Not everyone who looked for the Hunley found it, but by discovering where the Hunley was not, their efforts made it possible for those who followed them, to find the Hunley.

Several of you have asked for my opinion on who found the Hunley. I have not taken a position on this subject one way or the other. My opinion will not resolve the ongoing controversy of who found the Hunley, so I have stayed out of the argument. I will however, bow to your requests. I am currently working on an article that states my opinion as to who should be credited with finding the Hunley (I have not decided on a publish date yet). I am sure there will be enough to upset both sides of this heated debate.

Take care, and have a great week. 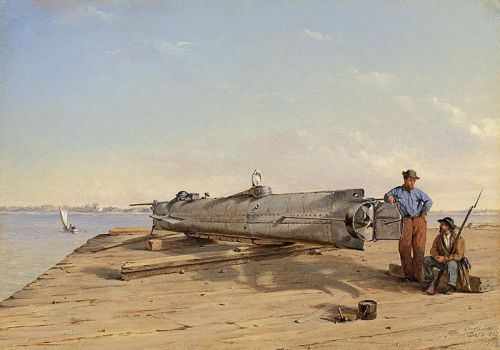 4 responses to “Back to the H.L. Hunley”