There are two historical topics which I enjoy studying and am loathe to write about, ironically for the same reason. The first is RMS Titanic, and the second is the American Civil War or as it is known in the South, The War of Northern Aggression. The reason I do not like writing on these two topics is that they are fields of historical research where emotional attachment and opinion override evidence and logic. It is in these two fields of historical research where people make the strongest assertions that their opinion is not opinion but fact, and where the discourse between those of different opinions is the most disrespectful and caustic – at best. When all else fails, the intelligence of opponents is attack as if, you guessed it, these attacks (opinions) were also established fact demonstrated by evidence instead of what they really are, which is dogmatic opinions. And what are those opinions, really? In most (but not all) cases they are an attempt by someone losing an argument to bully an opponent into silence, or someone content to find “authorities” they agree with to mimic instead of researching the material themselves. This last group moves to the attack the quickest depending on how long their memory is. The fewer words of their hero they can remember, the sooner they launch into personal attacks.

Today I wish to discuss black (negro, colored, people of color, Afro-American, African-American, or whatever term your generation uses) who are veterans of the Confederacy. I am sure I will have something to say to upset everyone, at least a little bit.

I remember a long time ago I had an English teacher talking to me about essays. She said it is hard to prove a negative. You know what I mean, bigfoot doesn’t exist, space aliens don’t exits, God doesn’t exist (I’m not taking sides one way or the other on these, they are just examples). So, I am going to start with the negative “… did not happen,” side of this story and then move on to the “… it did happen” side of the story, and end with my analysis. Like I said, I’ll probably upset everyone a little, but if you read my articles two years ago on how I do research then you will not be surprised by my approach.

What got me started on this is an episode of The History Detectives on PBS. A show I thoroughly enjoy. You can go to www.pbs.org and watch this particular episode for yourself (aired October 11, 2011 : episode title “Chandler Tintype, Hollywood Indian Ledger, Harlem Heirs). It is one of the few programs on TV that I really enjoy, and I also like each of the show’s hosts. They all do very good work and their support team is very good at what they do. Wes Cowan hosted the segment I am going to use as my intro into this topic. Now, I need to be fair to Mr. Cowan, he is an appraiser and auctioneer, not a credentialed historian. But he does have a good foundation in history for his work, and (in my opinion) does an outstanding job on the show.

For those who do not know, viewers contact the show about an object they have. An object they know nothing about, someone told them about, or just something they want to know about that is or could be historical. The hosts then track down the historical evidence using primary source material to tell the owner what they have.

The part of this particular episode we are interested in is the first one and is about a Civil War photograph (not particularly rare), of two confederate soldiers (a little more rare), one of them black (ok, more rare), sitting side by side. Yup, this is very rare Andrew (white guy) and Silas (black guy) are sitting side by side. Normally even the union photos of blacks and whites always show the black man in a subservient position (standing behind the white guy or holding the reins of the horse the white guy is sitting on), never side by side as equals would be. The descendents of the two men explain the family history states the one man gave the other his freedom before the war started, and that they fought together in the same unit for the Confederacy. 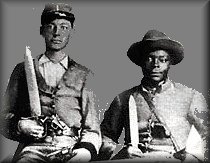 There was also other questions they wanted answers to, but we are going to confine our discussion to Silas’ service in the Confederacy. So, these are the questions we will examine:

Mr. Cowan went to Dr. Mary Francis Berry, University Of Pennsylvania Historian, (who teaches the History of American Law, and the History of Law and Social Policy. She also advises students in African American History) to answer these questions.

Dr. Berry shared, quite correctly, there were free people of color who joined the militia at the beginning of the war, but those units never saw battle and were disbanded by the state legislatures not long into the war. She went on to say that Silas was not freed on the eve of the war, because in Louisiana it was illegal to give slaves their freedom by 1856.

Mr. Cowan and Dr. Berry go on to talk about the “myth of black Confederates.” When Mr. Cowan tried to say it not possible for Silas to fight for the Confederacy, Dr, Berry said it would be inaccurate to say there was no way they could not have fought, but they were not accepted by the Confederacy as soldiers. Blacks were used in supporting roles for the Confederacy (cooks, teamsters driving supply wagons, servants, construction and other support roles). It was also said that since these men were slaves, they were forced into service and did not have a choice in the decision of whether they would support the Confederacy or not. There support of the Confederacy was, in other words, compulsory.

Next, Mr. Cowan used the Civil War Roster web site, which is maintained by the National Park Service. This site listed Andrew was listed, but Silas was not listed. Mr. Cowan used this to support his conclusion that Silas did not fight for the Confederacy. He also checked the 1860 census for Chickasaw Parish Louisiana and found no listing of any freedmen in the Parish (Louisiana has parishes instead of counties). The pension that Silas received as a servant (slave) in the service of the Confederacy was explained as part of the “Lost Cause” justification common in the late 19th and early 20th century in the South as an attempt to justify the Civil War.

Next week we will discuss the side of the argument that there were freedmen and slaves who fought for the Confederacy. The third part of this series will be my analysis of the pro and con evidence given by the two sides.

Comments Off on The Way We Were ?!? Part One