The goal of the Egyptian campaign was to weaken Britain, for at the heart of it all the Napoleonic Wars were one campaign between two nations, France and Great Britain. Great Britain feared that a successful France (without a monarchy) would eventually lead to the demise of monarchy and the hereditary privilege of the upper classes in Great Britain. France’s great fear was the subjugation of France to Great Britain.

There was a large contingent of scientists and artisans with the Egyptian expedition, but the scientific aspect of the expedition was secondary to the military goals. With France in control of Egypt, the British trade route from the Mediterranean to the East Indies would be disrupted. This was to be followed by a military expedition to India from Egypt to unite with French allies and disrupt the British trade routes to India.

While in Egypt Bessieres again distinguishes himself at the siege of Acre (19 march – 20 May 1799) and the battle of Aboukir (25 July 1799), this last battle saw him promoted to general of a brigade. While in Egypt Bessieres and Napoleon became good friends, a relationship which would only grow stronger. It was during this time that the War of the Second Coalition had started. France was suffering losses in Europe and the French people were becoming tired of the dictatorial leadership of the Directorate. Napoleon saw this as his chance.

Napoleon announced he was going on a voyage on the Nile Delta, while in reality he was returning to France to seize the government. On 23 August 1799, Napoleon left Egypt for France with only his most trusted men, of which Bessieres was chief among those.

The small cortie arrived in France in September. Abbe Sieyes, one of the five directors of the Directorate, was planning a coup to stop the Jacobins. Sieyes was planning on Napoleon’s popularity with the people to advance the coup and place himself at the head of France. Napoleon planned a coup within the coup using his small group of select, trusted officers. Bessieres was a member of this small group and helped Murat, Lannes, and Marmont secure the support of the Army for Napoleon in the coup d’état.

Napoleon wanted a wedding between Bessieres and his sister Caroline Bonaparte, However, Bessieres preferred his childhood sweetheart. Then Napoleon decides to wed his sister to Murat or Lannes. Murat and Bessieres were great friends and Caroline preferred Murat, but Napoleon preferred Lannes. Bessieres intervened and influenced Napoleon to choose Murat, and Lannes became a lifelong enemy of Bessieres. There would be many clashes between Bessieres and Lannes in their future. Lannes would go on to wed and have a happy marriage with his wife (this was his second wife), but the bitterness with Bessieres would only grow. 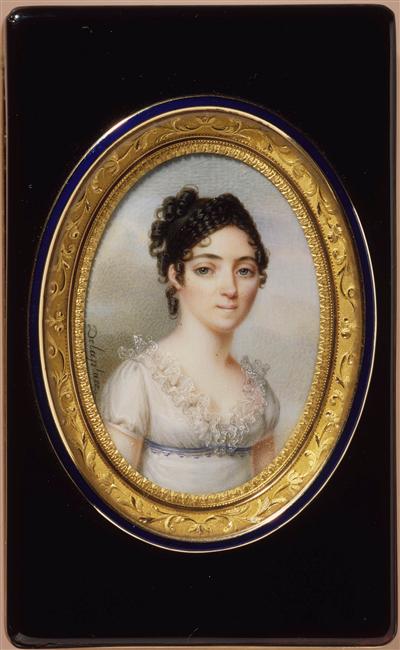 At age 33, on 26 Oct 1801, Bessieres married 20 year old Adele Marie Jeanne Lapeyriere (1781-1840). Miss Lapeyriere was of modest wealth (without fortune) from a royalist family. The Duchess d’ Abrantes said of Miss Lapeyriere, “… perfect model of all the virtues of wife, mother, daughter, and sister.”

Bessieres saved Napoleon’s life by exposing the plot of an artist, Caracchi, to blow up Napoleon at the theater. When Napoleon decided to execute the Duke of Enghien (related to the ruling Bourbon family of France) on constantly changing charges, Bessieres protested long and loud against it.

During the peace, Napoleon kept Bessieres a busy man as a diplomat, ambassador, and in arranging a royal marriage for the sake of political alliances. In 1804, General Bessieres was made a Marshall of France; he was fourteenth on the promotion list after Napoleon had reinstituted the title. At the time Marmont (who was upset he did not make the list) said, “If Bessieres is a Marshall anyone can be a Marshall.”

Life was good for the Marshall by 1804, France was at peace, he started his family by marrying his childhood sweetheart, his son Napoleon was born 2 August 1802, and he was Napoleon’s best friend. Honors and awards were bestowed upon Marshall Bessieres, but the peace was to last for a mere year. In eight years he would be killed in battle, but it was also in those eight years that the level of his compassion and influence would be revealed.